In recent years, the gut microbiota has become a focal point of modern research and a ubiquitous topic of scientific and popular interest. The gut microbiota is the complex and dynamic population of microorganisms in the human gastrointestinal (GI) tract, where it is suggested that about 70-80% of immune function resides. As scientists discover more about the relationship between the gut microbiota and health, the potential roles and benefits of probiotics, prebiotics and, the evolving term, postbiotics, have been examined more closely. While each of these “-biotics” family members sound similar, they are uniquely different.

The International Scientific Association for Probiotics and Prebiotics (ISAPP) defines probiotics as “live microorganisms that, when administered in adequate amounts, confer a health benefit to the host.”1 While the benefits of probiotics are widespread, they are highly individualized, especially considering the hundreds of species and strains which fall under the probiotic genera, which produce different benefits on their own or in conjunction with others. In supplements, probiotics are measured in colony-forming units (CFU), which indicate the number of viable cells. Many probiotic supplements contain 1 to 10 billion CFUs per dose, but some products contain upwards of 50 billion CFUs. However, according to the National Institutes of Health – Office of Dietary Supplements, the higher CFU counts do not necessarily improve the product’s health effects. Each strain of bacteria needs strain specific science to provide its level of effectiveness. Therefore, some strains may require 10 Billion or 50 Billion CFUs to offer a benefit, so it’s important to research specific strain benefits before consumption. While many strains of probiotics have been shown to have numerous health benefits, including support for digestion, skin health, and immunity, there are ongoing studies on the identification of new strains for potential as probiotics and further exploration on existing strains for novel applications.2 Most research has been conducted on specific probiotic strains of the following genera: Lactobacillus, Bifidobacterium, Saccharomyces, Enterococcus, Streptococcus, Pediococcus, Leuconostroc, Bacillus and Escherichia coli.3 However, it’s important to note that since the composition of the gut microbiota varies between individuals, there will likely be differences in the health effects of probiotics, prebiotics and postbiotics.

Accumulating research on probiotic species, applications for specific strains, dosages and forms, safety, and shelf life has allowed for a better understanding of these microorganisms and has led to more practical and consistent recommendations from most food and nutrition professionals – but ongoing research is necessary to further support recommendations for specific medical conditions. According to the ISAPP, evidence suggests that certain probiotics can support immune health, decrease antibiotic usage, aid in digestive health and improve blood lipid profiles in healthy individuals. However, probiotic recommendations for those with compromised immune systems, critical illness or leaky gut should be made with caution as common adverse effects may occur.

Not to be confused with probiotics, prebiotics are typically largely fermentable complex carbohydrates that help to nourish the beneficial gut bacteria so they can better thrive; essentially, prebiotics are food for probiotics. Commercial products containing both prebiotic sugars and probiotic organisms are often called synbiotics. Prebiotics are found naturally in many foods, but more abundant in those those that are rich in dietary fiber and resistant starch, such as plantains, beans, lentils and whole grains. Prebiotics can also be found in dietary supplements, many of which focus on supporting a specific medical condition. Because these carbohydrates are not digested by the body, they become fuel for bacteria and other microbes.

While the association of probiotics and prebiotics with health has a long history, less is known about the role and definition of postbiotics. Despite experts having knowledge of postbiotics for years, the term does not yet have an official definition. Literature has described the evolving term of postbiotics as functional bioactive compounds generated in a matrix during fermentation, which may be used in combination with nutritional components to promote health. Postbiotics have been a target of research because of their clear chemical structure, long shelf-life and safety dose parameters and include many constituents such as metabolites and short-chain fatty acids, which affect a range of physiological processes. While it is suggested that postbiotics may contribute to the improvement of human health, the exact mechanisms are not fully understood and remains to be an area of current scientific exploration. However, scientific research suggests that the mechanisms of action of postbiotics seem to be mediated through an interaction between the host and microbial products, which can impact the immune system and anti-inflammatory responses.4

Due to recent technological advancements and rapidly accumulating knowledge, further studies are underway to investigate how pre-, pro-, and postbiotics may play an integral and supportive role in gut microbiota, specific diseases and overall health. This ongoing area of research will provide further insight into the interactions which occur within the host-microbiome and how this may contribute to health and disease with the hope of eventually finding therapies to better support health and treat diseases.

With one billion probiotics in every serving plus 50 superfoods, the Orgain Organic Superfoods Powder offers a convenient and efficient way for individuals to consume probiotics to support digestive and overall health. The Organic Superfoods Powder contains probiotic Bacillus coagulans MTCC 5856, which is a room temperature stable, has the ability to withstand high heat, lactose free and non-GMO probiotic preparation with GRAS status.5 Research has shown that this probiotic may support gut health with excellent in-vitro functional efficacy in simulated digestion, adhesion to colonic cells and immunomodulatory properties.6 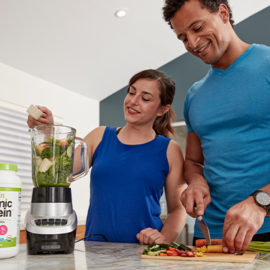 Uncovering the 2020-2025 Dietary Guidelines for Americans

Powering Up with Protein Powder 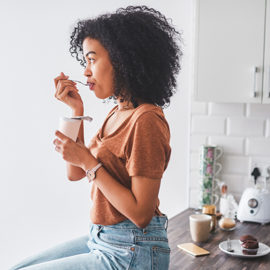 The Impact of Diet on the Gut Microbiome 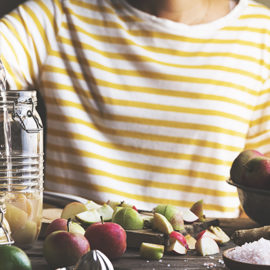 The Role of Nutrition in Immunity

Introducing The Orgain Nutrition Advisory Board

Uncovering the 2020-2025 Dietary Guidelines for Americans